or 10 monthly payments of $390 with www.artmoney.com

Or 10 monthly payments of $550 with www.artmoney.com 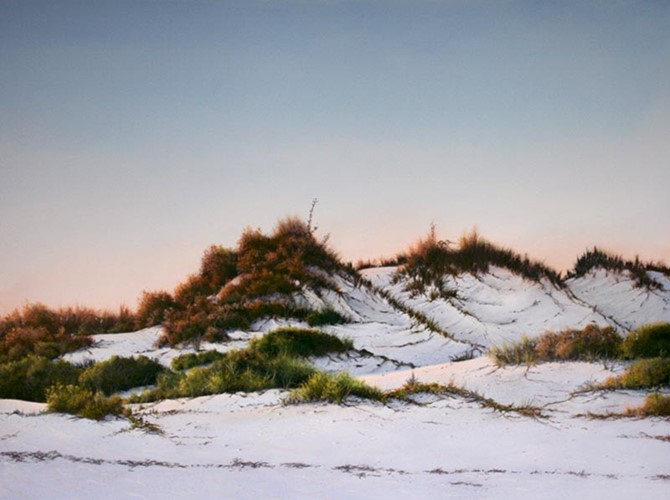 "my paintings are a direct result of location.It is the colours, textures, smells, patterns,in fact the essence of a place that inspires my images.
The interpretation may be realistic, but often may develop more abstractly."

James Ainslie’s preferred palette is acrylic paint on paper, with the occasional use of mixed media. His forte is modern realism, although he also produces abstract art. Ainslie’s paintings resonate with an inherent passion for the country’s unique beauty, particularly the sandy dunes and reflective waters of Queensland and South Australia. Ainslie was born in SA in 1950, graduated in art from the South Australian School of Art and has exhibited throughout Australia and overseas since 1975. Sand and water have always inspired his work, harking back to a childhood in South Australia, spent playing around the Coorong and exploring the huge sand tracts around the Murray River. Now living in Noosa, he has turned his attention to the undulating dunes of Fraser Island and the many beaches along the Sunshine Coast shoreline.
Annual visits to Broome ensure that Kakadu and The Kimberley remain strong influences.  Ainslie was regularly an artist in residence at Ayers Rock, and was invited to represent South Australia in London with 6 other artists, and showed at the Museum of Fine Art in Pasadena, U.S.A. with Ainslie Roberts and Garry Duncan. James won the prestigious Camberwell Flora & Fauna Prize in 1990 and was co-winner of the Barossa Valley Heritage Award. His work is featured in prestigious collections such as Artbank; BP Australia; Reserve Bank of Australia; Mobil Australia; William Hancock collection, San Francisco; Banker’s Trust; Diamond Merchants, South Africa; and many public and private collections worldwide.